In His Own Words:

The technique used by squadrons of B-17s during the war was one of flying in a strict, tight formation at high altitudes. The lead aircraft was called the "lead plane", and its bombardier was therefore the "lead bombardier" for the mission. It was the lead bombardier's job to take control of the aircraft during the final minutes of the bomb run. From the "IP" (Initial Point), the formation turned downwind toward the target. Using the bombsight, the bombardier would carefully fly the aircraft on a direct course to the target. The rest of the aircraft would follow the lead bomber, and remain in tight formation behind. At the instant the lead bombardier released his bombs, the planes that followed would release theirs. This would ensure that all high explosive bombs would be dropped in an accurate, deadly pattern, thereby ensuring maximum damage on the target below. The squadron of bombers looked to the lead plane, and its bombardier, to hit the target.

This was my 30th mission: the airdrome at Oberpffafenhofen (near Munich, Germany) was where Messerschmitt fighters (ME 109s) were assembled and tested. Knocking out this target would do much to keep Hitler's aerial war machine from replenishing its rapidly depleting fighter force, which was caused by gunnery from the bomber gunners and from our own fighter escorts (we didn't always have fighter escorts, however). We were told during our briefing to expect very heavy resistance.

Our plane flew in the third position on this particular day, which meant that we were to the left, and just behind, the lead aircraft. [See Diagram of Typical Formation Pattern]. If the lead plane could not drop its bombs for whatever reason, it was up to us to take the place of the lead aircraft and successfully carry out the mission.

After three and a half hours, our armada of heavy bombers reached the "Initial Point", and turned downwind to the target. We were flying at our assigned altitude of 26,000 feet in order to make it more difficult for the enemy flak gunners to find their marks, and to a fixed altitude separation from other bomb groups which might be hitting the same or other assigned targets in that vicinity.

One nearby explosion sent pieces of shrapnel through the plexiglass nose of our aircraft leaving a gaping 4-inch hole through which a subzero blast of air poured. As bombardier, my position in the aircraft was just three feet from the now-perforated plexiglass of the nose, and the frigid air blast made our compartment colder than a meat locker. The aircraft's slipstream flowing into the hole at 150 mph indicated airspeed made the temperature approximately -50 degrees celsius.

I was also struck by the shrapnel that made the hole in front of me.

At first I didn't realize I had been hit, but then I felt something warm: blood was running from a wound in my neck. Paul Moore, the navigator who sat behind my station contacted our pilot on inter-phone, and indicated I had been hit, and was bleeding. The bleeding was made worse because we were at 26,000 feet, in an unpressurized aircraft. Lt. Watrous, our pilot, asked if I could still function. Though I could now feel pain and stiffness, I felt I could continue, and I assured him I could complete the bomb run.

It was then that the lead ship radioed that, due to some malfunction, they couldn't open their bomb bay doors. This was very serious, because it meant that the remaining aircraft would withhold their bomb release, causing a dry run for the whole bomb group, which was an absolute no-no. A second pass over the target would not only mess up the whole bomber stream but would expose the whole bomb group to even more ground fire, and to any fighters that may be lurking outside their own flak area. I called Lt. Watrous and told him I could accept the lead in spite of my wounds.

The lead plane then dropped 200 feet in altitude, and we maneuvered into the lead position. The former lead aircraft then moved to our previous #3 position.

Lt. Watrous then turned control of our aircraft over to me to get our squadron lined up precisely on target. This part of the mission is a very busy time, and I focused my attention on the task at hand: identifying and placing the cross-hairs on the target and synchronizing the bombsight until the crosshairs remained fixed on the target, checking all of my switches, etc., and locking the bombsight trigger into the release position.

My blood was now running into the bombsight's optics where it instantly froze due to the sub-zero temperature in the aircraft. This obliterated my view of the target. I pulled out my handkerchief and wiped the frozen blood out of the optics. The pain was getting worse but all my previous training paid off--I was able to shove the pain out of my mind to get the job done. The seriousness of that moment had me focused on my job. I knew all the while that the success of the whole mission, not to mention the safety of the 279 other men's lives behind me, were at stake. 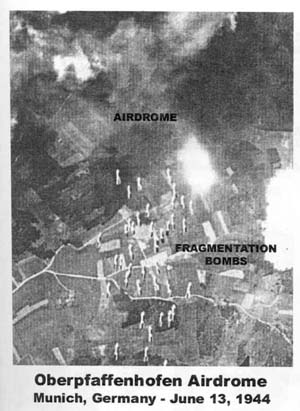 Until I gave the "Bombs Away!" signal to the pilot, I was not physically aware that I had been wounded in other places: my left hand and leg. After leaving the target area, Paul Moore administered first aid from a kit we had in the nose of the aircraft. The blast of cold air from the hole (which was located in the lower 1/3 of the nose of the aircraft) was intense. We at first couldn't find anything suitable enough to cover the hole with. Then, we elected to cover the hole with the bombsight cover, which was made from a heavy canvas. I sat in the bombardier's chair, pressing the bombsight cover up against the hole with my right foot. After a time, Paul Moore and I swapped places and he held the cover in place. We rotated this chore back and forth until about four hours later, when we arrived back at our base at Celone Airfield in Foggia, Italy.

I was taken to the Dispensary and treated for my wounds. Upon examining my neck, it was determined that had the shrapnel struck just 1/16 of an inch to the left, it would have cut my Jugular vein and I would certainly have bled to death. The shrapnel was left where it was and is in my neck to this day.

On the day of that mission, I received my second Purple Heart, and was promoted from 2nd to 1st Lieutenant. I flew another 20 missions after that incident and was rotated to the States in August, 1944, completing my combat tour. It wasn't until the early 1980s that I learned from one of my squadron officers, while at the annual 463rd Bomb Group reunion, that he had seen orders with my name on it awarding me with the Distinguished Flying Cross for that mission. An airman at Hill Air Force Base in Ogden, Utah, spent some time looking for the Citation and eventually found it in a military records storage depot in St. Louis, Missouri. Apparently I had rotated to the States so soon after the completion of my combat tour that the Citation never caught up with me until many years later, when I searched through channels to find it.


This Website Designed, Created and Maintained by John K. Wise, Youngest Son of Donald Wise
This site has been restored by Jimmy in memory of John Keith Wise (guestbook)